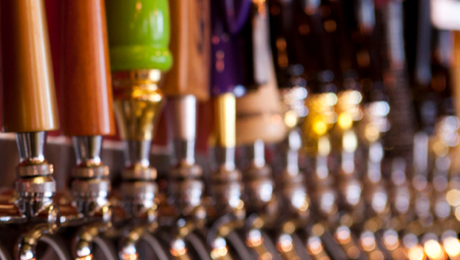 It’s a week since pub doors opened again in England following the forced closures due to the Covid19 pandemic. But it’s still not life as we knew it yet, with strict rules to follow in order to satisfy the government guidelines.

No bar service is allowed and customers may need to register on arrival, with establishments having to offer table service.

Two-metre distancing is in force, however if that isn't possible customers can sit one metre apart as long as measures – such as back-to-back seating, perspex screens or partitions between tables – are in place.

Some pubs had been allowed to partially reopen in June using outdoor market-style stalls but last weekend marked a much wider easing of the lockdown, although rules dictate tables are set two metres apart with screens erected to protect staff.

Bar staff are supposed to wear masks and gloves at all times and queuing at a crowded bar is strictly out, with customers able to order drinks using a downloaded app or via table service.

A one-way system is part of the protocol with customers entering via one door and having to leave via another, but limits on customers mean they can only enter if there is a seat for them.

Bars and restaurants have been asked to keep a record of everyone who visits before being served, with personal details kept on file for four weeks to be used to contact people if one of the patrons is hit with coronavirus.

Access to restrooms is controlled in order to keep as many people separated as possible and liquid soap, hand sanitiser and working water taps must be available.

Temporary changes to licensing laws also allow many more licensed premises to sell alcohol for consumption off their premises, with customers able to buy their drinks from a pub and consume them elsewhere, making social distancing easier.

Car parks and terraces can also be utilised as dining and drinking areas, enabling customers to enjoy their drinks and food outside.

In Wales, pubs, cafes, restaurants and bars can reopen indoors from 3 August, providing coronavirus cases continue to fall. Pubs and restaurants will be able to reopen outdoors from Monday, as part of a phased return to trading in the hospitality sector.

The first phase will see the reopening of outdoor spaces owned by businesses and subject to existing licenses – it will require measures to reduce the risk of transmissions, such as pre-booking and table service.

But the boss of Brains, Wales’ biggest brewers, has said it may not bother to re-open most of its pubs until August when indoor opening returns.

Brains CEO Alistair Darby revealed that its pubs would "struggle" to restock in time.

Brewing has still been taking place at the firm's site on the outskirts of Cardiff to cater to the English market and the company is now starting to increase production as the Welsh hospitality market takes its first steps to returning to business.

"As far as our breweries are concerned, we are gearing up and we will be geared up to provide the kind of beer we're going to need, from, we believe, the week commencing July 20," Mr Darby said.

But Wetherspoons has confirmed it will only re-open its pubs in Wales "when they can fully do so" to avoid a "half-hearted" re-opening, a sentiment Mr Darby agreed with.

When the Brains pubs are back in business, Mr Darby said people would be able to order food and drink directly to their table and settle the bill via an app.

In Scotland pub beer gardens have been allowed to open since last Monday.